Last Saturday I went for grocery shopping at Kafu. Since aku mmg dah expect some of items were more expensive that other hypermarkets, so aku tak beli certain items. And I expected to shop for around RM300. I admitted, some of the items were cheaper. The problem with that new opened hypermarket at Bukit Rimau was the price displayed. The one that displayed is different with the one when u checked out. 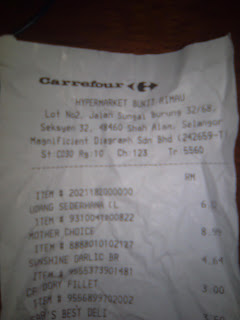 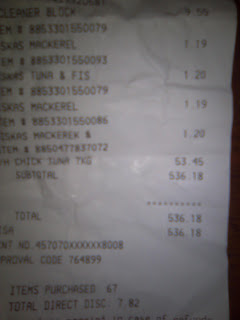 Aku pun amik resit, dok kira. Lagi terkejut bila tgk harga iron board was not RM38.90. But it was RM55.90. My goodness! Man! Mcmana letak harga? Aku mmg noticed some of the items dia punya harga tak masuk akal. You've got to pick up the item and scan at the scanner provided to double check. Well, it's probably my fault. I didn't double check. Tapi, pihak store shouldn't do that and be extra extra careful in putting their price. 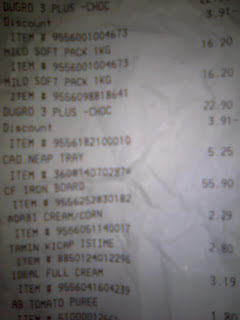